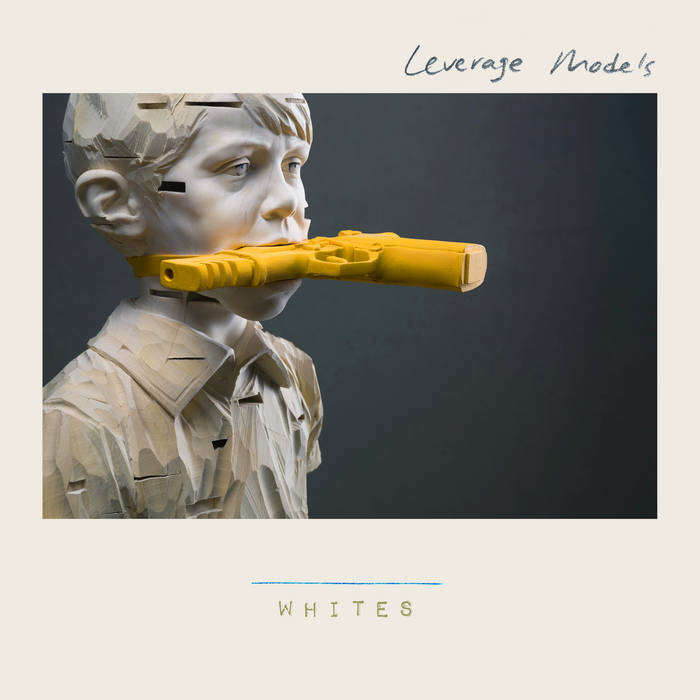 Whites is the 2nd full-length album by Leverage Models. 50% of label and artist proceeds are donated to the Southern Poverty Law Center (SPLC)**

Whites was completed late in 2015 while touring North America extensively with Son Lux, Helado Negro and others, performing the critically praised EPs and debut album released on Hometapes. Whites documents a band that had evolved from the evasive, ‘New Romantic’-tinged bedroom-pop into an dis-comfortingly ecstatic live band co-fronted by Alena Spanger (formerly of Tiny Hazard) and Shannon Fields. In performance of the "Whites" material, the band began to unleash Fripp-worthy guitar solos, a constellation of synthesizers, frenetic Afro-Latin percussion instruments, and the “combustible”, “tent revival fury” of Spanger’s and Fields’ performances. Small-label economic troubles initially delayed release in early 2016, and the band went on hiatus from live performances from the 2016 American presidential election until 2018. “As hard as we worked on that record and wanted it to be heard, I couldn’t keep being entertaining and pushing my record, saying ‘look at me’ every night, in the face of what was happening in the country”, Shannon Fields wrote recently. “So I shelved it. But lately I’ve been feeling isolated in a way that feels unhelpful too. I miss and need the community that comes with performing.”

Whites magnifies the satisfying contradictory extremes of the debut Leverage Models record while embracing a new production clarity and a soft, humane core that runs through its 10 songs. The album is resistant to ‘type’ and better reflects the contradictory emotional truths of its time, place and the people who created it. Slightly more melancholy than its predecessor, but also more energized and inviting, Whites is a marked evolution from the debut template. It is less a protest album than a collection of impassioned, fragmented voices: the victimized, predatory, self-assured, lost, wealthy and disenfranchised alike. The magical realist character studies that comprise its sun-glittering, euphoric pop melodies are populated with the angry, myopic and morally compromised characters of a dream-hazy, pre-apocalyptic America. Although Whites absolutely explodes with hooks and electric melodies, and shakes with propulsive club grooves, it is not at all an easy listen. As the band’s short bio reads: “Leverage Models makes pop songs about transubstantiation, ritual abuse, political apathy, divorce, white collar criminals, poverty, white liberal guilt, anxiety, & self-harm. with roto-toms.”

We hope you both enjoy and find something to care about here.


**The SPLC is an “American nonprofit legal advocacy organization specializing in civil rights and public interest litigation.” Founded by civil rights lawyers to combat institutional racism, the SPLC monitors domestic hate groups and provides legal challenges “to protect the civil rights of children, women, the disabled, immigrants and migrant workers, the LGBT community, prisoners, and many others who faced discrimination, abuse or exploitation.”

Bandcamp Daily  your guide to the world of Bandcamp